Oligarchy is a form of government that consists of a small group of people ruling the country or state. It was first recognized in Ancient Athens since Athens was governed by a few groups of people, known as the aristocracy. Historically, empires and kingdoms were ruled by an elite of people, who have received high education, wealth, and economic status. Thus, democracies and monarchies are a part of oligarchies because a collective group of people are ruling together.

Oligarchies can also consist of groups who are not directly associated with the government, but play a large role in shaping the government and the economy.

Today, there are 5 key examples of oligarchies around the world: Russia, China, United States, Saudi Arabia, and Iran. 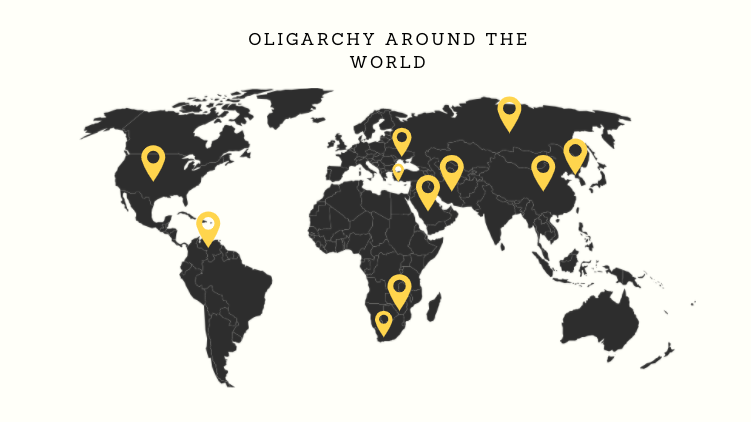 Russian oligarchs were influential forces during the dissolution of the Soviet Union Era due to its wealth and position in society. Especially during the collapse of communism, the oligarchs placed a lot of money and resources to drive back the economy. As owners and leaders in various business industries, they had the money and resources to help improve those industries in order to advance the economy. However, oligarchs have had a negative impact on Russian economy by buying more private land and sending and receiving money from other countries.

Similar to Russia, China’s business leaders make up the oligarchy of the country. They play a massive role in defining the economy and shaping the industry. However, some of them have been caught due to corruption suspicions and insider trading. One such example is Huang Guangyu, who was the richest person in China in 2008, was arrested because of bribery and insider trading. Eventually, there were a growing number of Chinese millionaires and billionaires who were being arrested and serving prison sentences due to performing acts of cheating.

There have been some disagreements about whether America is truly an oligarchy, but there are some aspects that do make it an oligarchy. The role of corporations and special interest groups plays a role in defining and influencing American government and legislation. With lobbying and interest groups, many of them have provided funding and money for different legislators to pass bills that favor those interest groups and lobbyists. During the Gilded Age (in the 19th century), oligarchy was a great example of how the government functioned because there were a lot of large corporations that were taking control and influencing the government on how they should act.

Today, Saudi Arabia’s ruling group consists of Saudi monarchs and family members of the monarchy ruling the country. The members of the Saudi monarchy family function as the head of state and government. The heir to the throne serves as the deputy prime minister and crown prince before becoming king. It is a group of royal family members who are making the laws and ruling the country.

When Iran became an Islamic Republic in the 80s, it resulted in a group of politicians who were defining the government and rules in society, especially integrating Islam traditions and practices into the law. Previously, oligarchy was a lot more prevalent in the Pahlavi era with thousands of wealthy families exchanging money back and forth. The new Islamic Republic claims that it wanted to get rid of that oligarchy and run with a government that is based on meritocracy, but there are still families benefiting from the current administration due to their business dealings and their wealth, which is wielding power from the government. 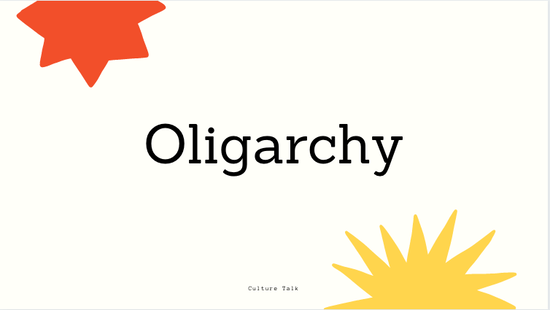