A republic is a type of government that is representative of the people. The people are in charge of electing leaders who will represent the people’s  interests. It was first introduced in the Roman Empire.

History of the Republic

While the Roman Empire had a king or queen  as their leader, the Roman empire created the first deliberative body that was elected by the people, which was called the Senate.

The French Revolution took place a couple decades later, but this was more about abolishing the monarchy because the wealthy were profiting off, and the common people were not getting what they wanted. French society was divided into Three Estates at that time, which were the First (clergy), Second (nobility), and Third Estate (commerce/trade). As a result, the revolution put an end to the monarchy, and led to a new era of representative government.

There are two types of republics: presidential and parliamentary.

The Presidential Republic is a type of republic that keeps the three powers of government , which are legislative, executive, and judicial, separate. Checks and balances help monitor the power of each branch so that one branch does not become too powerful. The  people directly elect the president versus the legislative branch choosing the chief executive. The president serves as both the head of state and government and  is in charge of assembling a  cabinet of advisors and managing the army.

Examples of presidential republics are Argentina, United States of America,  and Sudan

The Parliamentary Republic is the other type of republic that combines the function of the legislative and executive branch  . The chief executive is not directly elected  by the people. Instead, the legislature picks who  should be the leader  of the  country. In some countries, the  prime minister, equivalent  to the president, serves as the head of government and not head of state because the queen  or king serves as the  symbolic head of state.

Republics were also utilized by non-democratic countries, such as North Korea and Chile in the 20th century. Islamic republics are another example of republics that do not take a democratic approach. It is religion that influences how society should operate. When the Iranian monarchy was overthrown in 1979, the people established the Islamic Republic of Iran, and implemented the sharia law as the main law.

Educator Resources to Check out 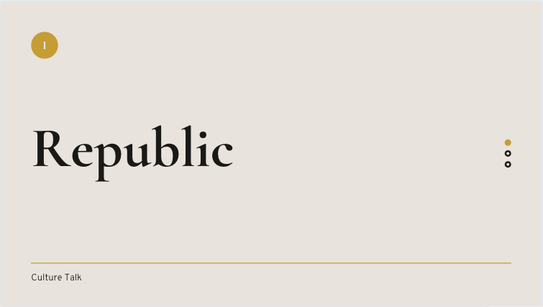