The Republic of Ireland (Capital: Dublin) is a nation located on the island that sits in the North Atlantic sea just west of Great Britain (the island home to England, Scotland, and Wales). Despite its close proximity to the United Kingdom, the country is not under British rule but the northern region of the island, Northern Ireland (Capital: Belfast) is a part of the United Kingdom, a reality that has created a complex geopolitical relationship in this region.

Ireland’s climate is mild and generally temperate, avoiding any extreme temperatures. Moreover, the region is prone to frequent rainfall and often windy as it sits on the sea. Much of the geography is low-lying mountains and plains. In the Middle Ages, the country was mostly woodland but there was large-scale deforestation during Oliver Cromwell’s rule that drastically changed this fact: by 1900, forestry only made up 1% of total land usage. In an effort to combat climate change and restore the nation to its original ecological glory, policymakers have set a goal to plant 440 million trees by 2040.

Financially speaking, Ireland has a mixed economy with both private-owned and state-operated industries. For instance, railroad transport and health insurance are chiefly managed by the government while entrepreneurs are free to operate their own business for other sectors of the economy. Despite England’s previous control of the nation’s economy, the Republic of Ireland does not use the pound (£) and instead began using the euro (€) in 2002 after joining the European Union in 1973.

The official language of the Republic of Ireland is Irish although English is the predominant language as the Irish language was largely suppressed during the British rule of the country. Roman Catholicism is the dominant religion in Ireland and although the religion has played a significant social and political role throughout the country’s history, religious freedom is a right granted to all citizens in the Constitution.

The culture of Ireland is one that has been shaped by ancient peoples with strong Celtic influences. Notable elements of Irish culture include the Irish jig, Irish folklore (which includes stories of fairies and leprechauns) and celebrations like Saint Patrick’s Day and Halloween —which is believed to be an adaption of the Gaelic festival ‘Samhain.’

Celtic Ireland and Viking Raiders
​
As far back as 500 B.C.E. the Celts (along with their language, art, and culture) reached the island of Ireland. The Celts originated in central Europe as a collection of tribes with similar religion, language and traditions, and from there they migrated and spread their influence as far as France, Iberia and the British Isles. As a result of Celtic tribes settling in Ireland, a large Celtic population was established that —through isolation from other European influences and conflicts— left the most prominent traces of Celtic people as their culture, language, and history can be found across Ireland today.

When the Celtic tribes —chiefly the Gaels and the Irish— presided over Ireland during the fifth century C.E., neither the Romans or the Anglo-Saxons (who took control of modern day England) were able to successfully invade Ireland. Thus, the Celtic culture flourished and when Christianity arrived on the island with Saint Patrick in 432 C.E. many Celtic traditions were incorporated into the new religion. The use of the shamrock to represent the “Holy Trinity” and the use of the Celtic cross instead of the Catholic cross are just some examples of the Celtic influences that remained even after Christianity swept through the land.

Nordic raiders first began to attack Ireland in 795 C.E., using hit-and-run tactics to attack coastal monasteries. By the 840s these Norwegian vikings had established coastal settlements (such as Cork, Limerick and Wexford) around Ireland that allowed them to plunder the lands year-round. The Vikings are also responsible for the enslavement of many Irish natives so much so that the city of Dublin emerged as a slave market.

Luckily, Ireland had a decentralized government at the time, with many kings spread across the country, and while the Vikings believed this lack of unification to be a weakness, it eventually became the nation’s strength as the Vikings had difficulty subduing the multiple rulers. Gradually, the division of Irish government put a strain on the Viking influence there, and after  king Brian Boru attacked the Viking settlement of Limerick in 968, the Norse influence only continued to decrease. The Vikings in Ireland began to assimilate into the island’s way of life and many of them converted to Christianity. By the 1170s the Viking Age came to a definitive end in Ireland and the last Norse king was driven out of Dublin.

In the year 1166, one of the Irish kings —the King of Leinster— fled to France after a war with the Irish kingdom of Breifne and sought the aid of Henry II, King of England, in an attempt to reclaim his lands. In response, in 1169 Henry II sent Richard de Clare and an army of 600 Norman (the Normans are an ethnic group that originated from Normandy, France) knights to invade part of Ireland in an effort to help the King of Leinster. By 1175, Henry II had persuaded many of the Irish kings to accept him as the overseeing ruler of Ireland and the Treaty of Windsor was created to legitimize his control. With this arrangement, the Irish Church was integrated with the Roman Church system that England belonged to and the feudal system began to take dominance in Ireland. Subsequently, in 1216 the Great Charter of Ireland (similar to the Magna Carta) was published and in 1297 the Parliament of Ireland was founded.

As Norman settlers (who were also subjects of the English crown) migrated to Ireland, they began to integrate into Irish culture and many intermarriages between Irish and Norman peoples emerged. Naturally, the Norman adoption of Irish culture made England worry that the Irish people would regain control of the nation, so in 1367 the Parliament of Ireland passed the Statutes of Kilkenny. This  prevented Norman assimilation into Irish society by forcing Normans and other English subjects in Ireland to speak English and forbidding any intermarriages or alliances with the Irish.

Through the course of time and England's lack of diligence, by the end of the 15th century English control over Ireland had diminished and Irish culture began to flourish once again, this time with more Norman influences. However, the English rule of Ireland was revitalized in 1542 by the infamous Henry VIII, who disregarded the former title of Lordship of Ireland to declare himself the King of Ireland. What followed was the Tudor conquest of Ireland, a subjugation that accompanied the Nine Years’ War as the Catholic Irish resisted being forced into English Protestantism. The Irish lost the war in 1603 and the English regained control of Ireland. Still, the Irish did not give up easily and the 17th century saw the gruesome advent of both the Williamite War and the War of the Three Kingdoms.

As much as many Irish people desired independence, their efforts were unsuccessful and in 1801 the English government merged the two kingdoms and established the United Kingdom of Great Britain and Ireland. This union further diminished Irish freedoms as the Parliament of Ireland was abolished and replaced by a collaborative parliament in London.

The Great Famine struck Ireland in 1845 and lasted for six years, devastating the nation so much that approximately one-third of Ireland’s population perished. The famine was followed by an economic depression that spurred Irish emigration as millions fled to Canada and the United States in pursuit of a better life.

Irish nationalism grew during the 19th and 20th century, and the election of Daniel O’Connell into the United Kingdom Parliament in Ireland gave the Irish hope for an independent future. O’Connell and others like him began to advocate autonomy, campaigning to achieve “Home Rule” which would allow Ireland to govern itself while remaining a part of the United Kingdom of Great Britain and Ireland. Not all Irishmen supported Irish autonomy and groups like the Ulster Volunteers opposed independence, creating a distinct political divide in Ireland. Eventually, the Home Rule Act was passed in 1914 and provided that Ireland (excluding the region of Ulster that would later become Northern Ireland) would be given the right to govern itself. Enforcement of the Home Rule Act was delayed due to the start WWI, but after the war, the general election of 1918 was held, which allowed the Sinn Féin pro-independence republican party to gain prominence and establish a government and parliament for the new Irish Republic in 1919. Again, not all supported this move towards independence, and a violent three year war known as the Irish War for Independence enveloped the country from 1919 to 1921.

After the end of the Irish War for Independence, the Anglo-Irish Treaty was signed in December of 1921 and Ireland was given complete independence from British rule with the exception that Northern Ireland remain part of the United Kingdom. Disagreement over some of the provisions of the Anglo-Irish Treaty then led to the Irish Civil War, which was a three year battle between those who opposed and those who supported the new treaty that did not end until a cease-fire was ordered in 1923.

With the issue of Irish independence resolved, the newly founded Irish Free State was governed by the victors of the Irish Civil War, and it was not until 1949 that the state was finally declared the Republic of Ireland.

Ireland as of 2020
For several years, Ireland has experienced a time of peace and independence. Still, the issues of BREXIT (the United Kingdom’s withdrawal from the European Union) prove to be a difficult time for the Republic of Ireland as they work to negotiate a deal that will keep their economy intact even after BREXIT is enforced. The UK is one of Ireland's biggest export and import partners, so there are many negative consequences that Ireland could face as a result of the UK’s decision . Besides this issue, the nation is advancing as a global example for progressive government, making advances to become the greenest country in the world and being the fourth country to have an openly gay head of government when Taoiseach ("Prime Minister") Leo Varadkar served from 2017 to 2020.
​ 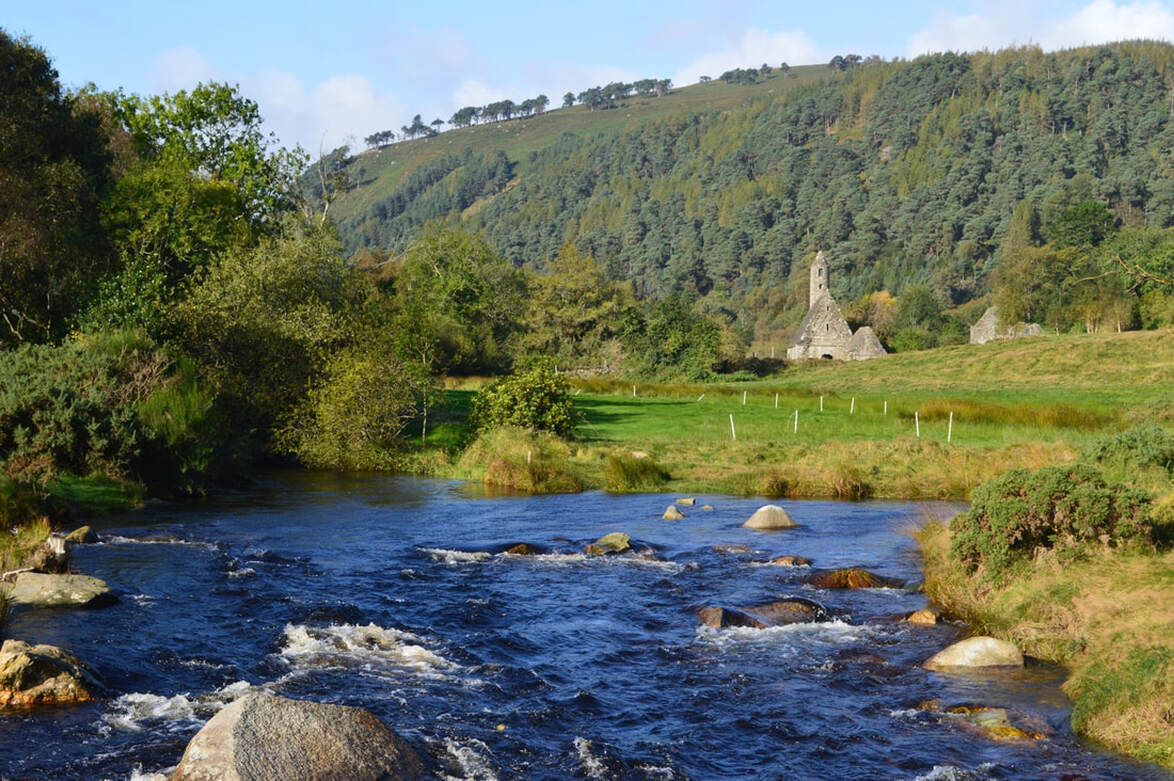 Glendalough Valley in the Wicklow Mountains National Park of Ireland is home to the ruins of a medieval monastery that was plundered by raiding Vikings. 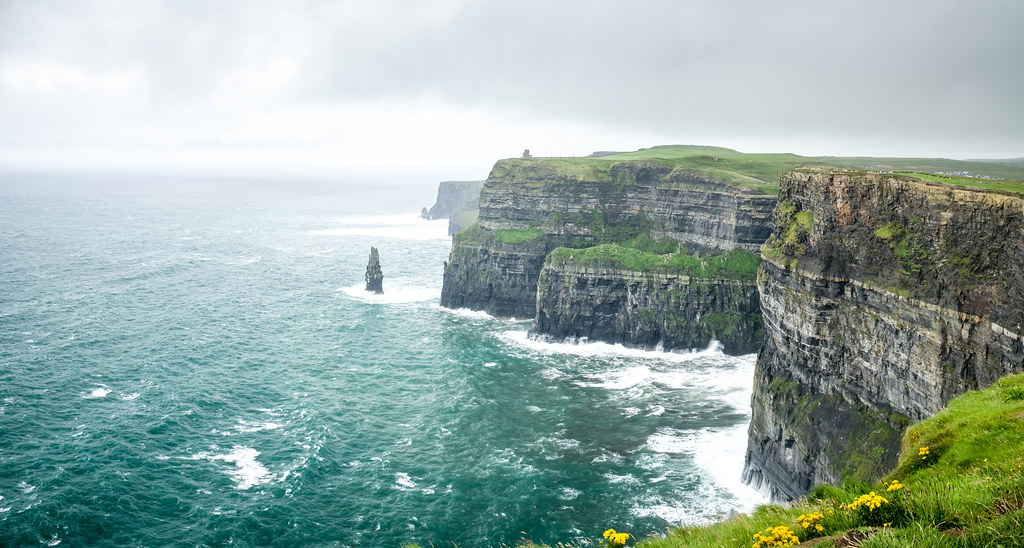 The Cliffs of Moher located on the Western coast of Ireland in County Clare are part of the UNESCO Global Geopark and a popular tourist attraction "Ireland" by luca.sartoni is licensed under CC BY-SA 2.0.
Sources Referenced:
https://www.history.com/tag/ireland

The Rise and Fall of the Celtic Warriors (https://www.youtube.com/watch?v=lmYQMJi30aw)

Why Ireland Split into the Republic of Ireland & Northern Ireland (https://www.youtube.com/watch?v=dCJMQgfHXNI)