The three most prominent events related to Sikhism are the Battle of Saragarhi (1897), Jallianwala Bagh massacre (1919), and Operation Blue Star (1984). Though there have been many important battles, won and lost, these are the three which show courage and its response, discrimination.
The Battle of Saragarhi was held at a signaling relay post of Saragarhi that was between Fort Lockhart and Fort Gulistan. It was fought on September 12, 1897. Led by Afghan tribal militants, the main motive was to attack the two forts. In order to do that, they had to cut off the communication between them, i.e., capture Saragarhi. 21 soldiers of the 36th Sikh Regiment (now 4th) were posted at Saragarhi while the Afghans were planning the attack. During this encounter, the 21 Sikhs fought until their last breath, hoping that either fort would sense trouble soon and send help. However, all 21 of them were martyred in an attempt to save their motherland from the invaders. Posthumously, the 21 soldiers were awarded the Indian Order of Merit Class III, an equivalent to present-day Vir Chakra, by Queen Victoria. 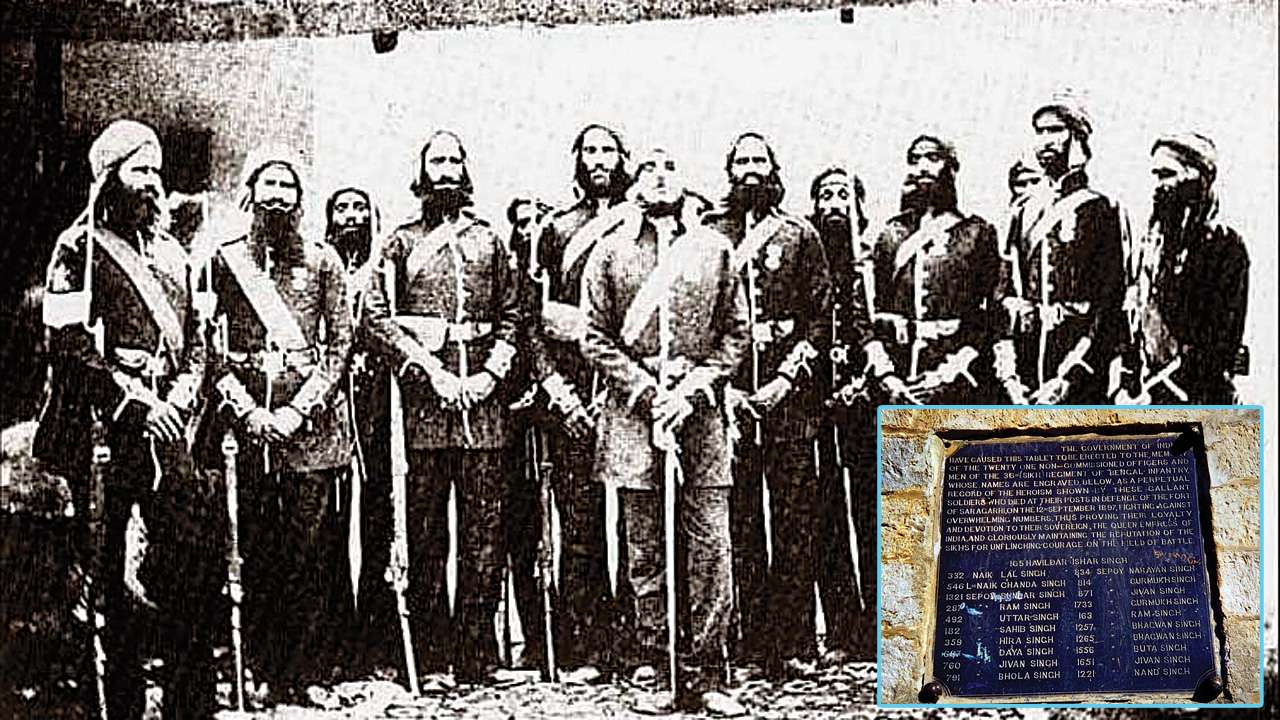 The 21 soldiers who were martyred at Saragarhi
Jallianwala Bagh massacre, also known as the Amritsar massacre, took place on April 13, 1919 when soldiers of the British Indian Army under Colonel Reginald Dyer opened fire at a crowd of unarmed Indians who had gathered peacefully to celebrate Baisakhi and protest the ban on public gatherings. Though the number of protestors was unknown, and the death toll too, an estimated 379 people were killed and 1200 more wounded. This was a brutal killing of many innocent lives and has left a scar on the whole Sikh community. The responses by the governments of India and Britain were stark contrasts. The Indian government ordered an investigation of the incident and resignation of Dyer. Sir Winston Churchill, then secretary of war, condemned him as well in his speech to the House of Commons in 1920, however, the House of Lords praised Dyer as the “Savior of the Punjab.” 100 years later, India still awaits an apology from Britain, but has got none. The site has now been turned into a national monument. 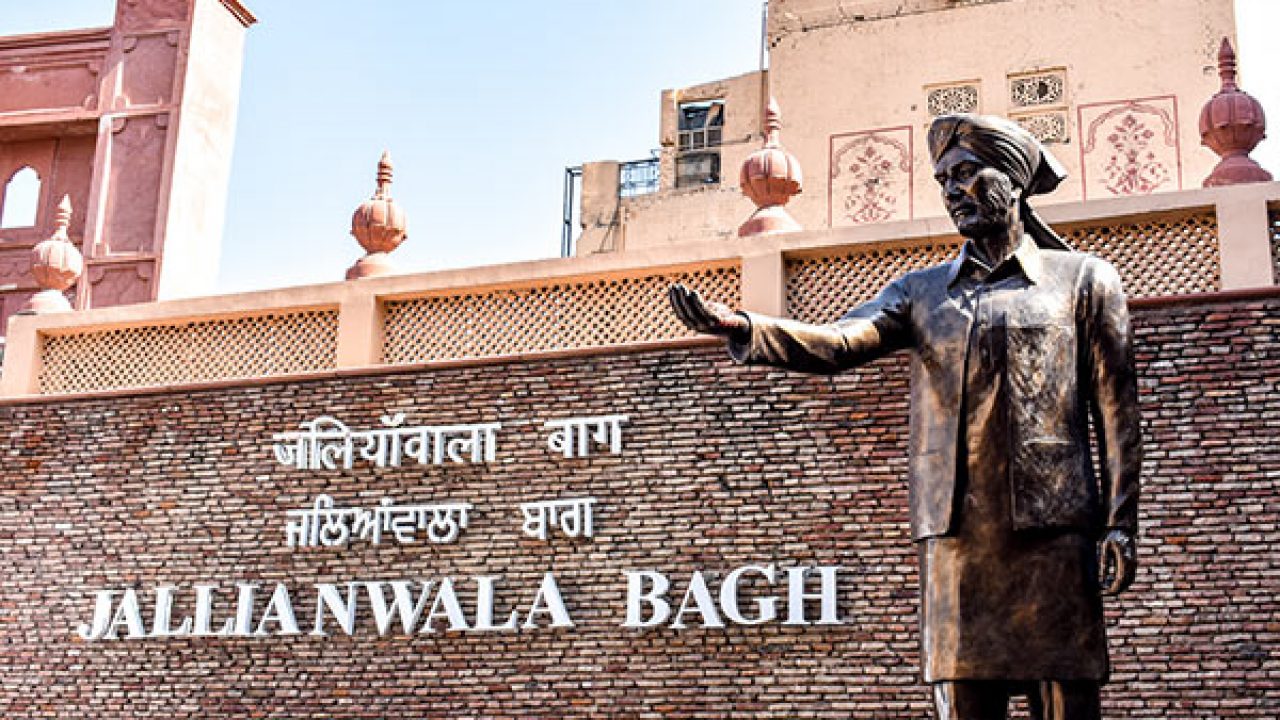 The entrance of Jallianwala Bagh
Operation Blue Star was a military operation ordered by then Prime Minister Indira Gandhi to remove Sikh militants who were gathering weapons inside the Golden Temple complex to establish authority over it. This was a part of the Khalistan Movement, a nationalist movement wanting to create an independent theocratic state of Khalistan for the Sikhs. Jarnail Singh Bhindranwale was the “leader” of the militants and the main motive of Operation Blue Star was to eliminate him, along with the others while regaining control of the Harmandir Sahib. Operation Blue Star was divided into two parts: Operation Metal, limited within the Golden Temple, and leading to Operation Shop which raided the Punjab countryside; Operation Woodrose, throughout Punjab, using tanks, artillery, helicopters, and armored vehicles. Throughout the period of June 1-8, 1984, no media were allowed into the state of Punjab, leading to a severe backlash against Indira Gandhi and her eventual assassination by two of her Sikh bodyguards, since she had allowed the Army to enter and wreck a holy place. Anti-Sikh riots followed her assassination and more than 3,000 Sikhs were killed in the entire operation. Operation Black Thunder was a repetition of Operation Blue Star, led by the ‘Black Cat’ commandos of the National Security Guards. This had two phases too, one on April 30, 1986, and the other on May 9, 1986. However, the latter operation inflicted less harm to the temple premises and also allowed journalists to cover the proceedings. 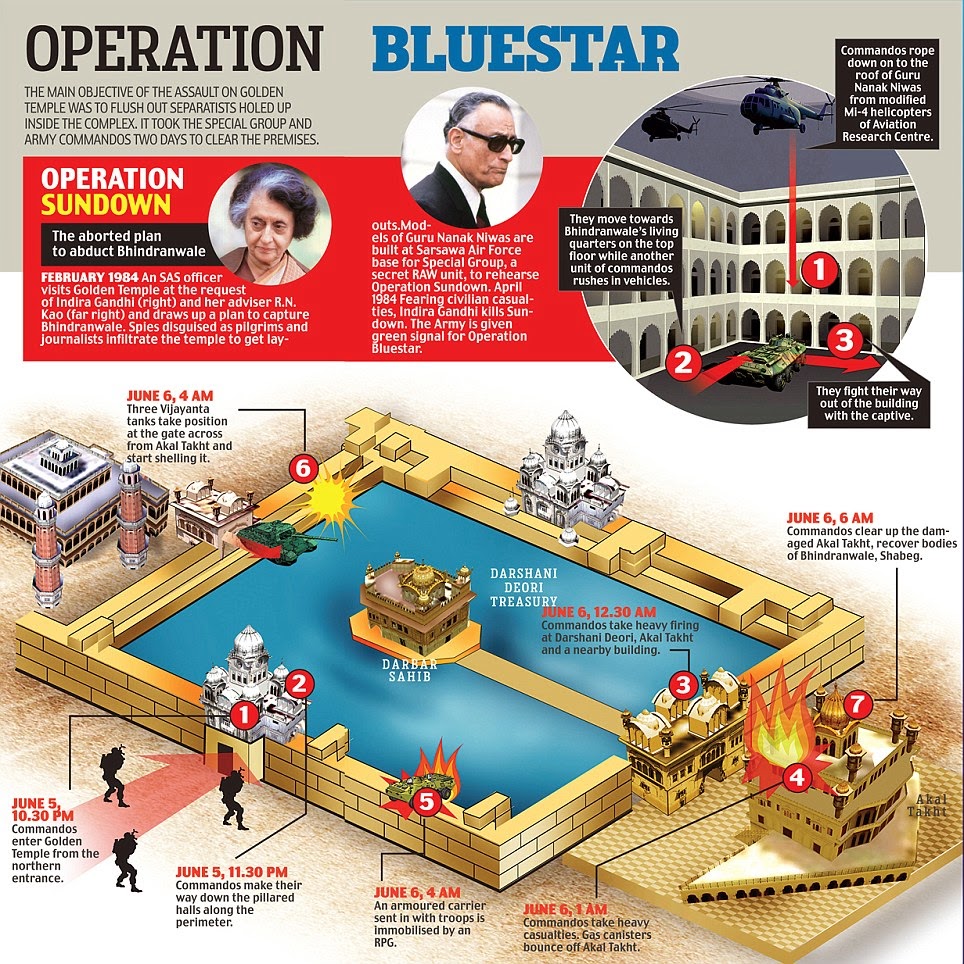