North America is a home to a plethora of diverse nations, making its history a very unique one. It consists of Canada, The United States of America, and Mexico as well as the islands in the Caribbean and countries in Central America.

The initial settlements occurred in 8000 BC with Asian people crossing the Bering Ice bridge, leading to settlements throughout North America. The hunting and gathering lifestyle helped the settlers capture and eat food. Ritual and religion are an important part of the early American culture as the American landscape is dominated by burial mounds in present-day Midwest region of the United States. Later on, settlers began to establish civilizations in the Southwest Region of modern day United States and Mississippi River Valley, which drove the cultivation of crops and domestication of livestock.

By the 1400s, there were several Native American tribes scattered all across America , holding various cultures and religions. When the European arrived in the 1600s, the Native Americans lost their land since the Europeans would settle on their territory.  The Spanish would colonize the southern United States; the French had a hold on Louisiana and territory up in Canada, specifically modern day Quebec. Slavery began to dominate American style of living because the slaves, imported from Africa, would work on rice or cotton plantations in the Southern United States, which served as the base for the Southern economy.

The British arrived in 1609, establishing their first colony in present day Virginia. Americans and British clashed later on when Britain limited the freedom of the American citizens. In 1776, American wins independence from Britain. Later on, United States adds on new territory from the Louisiana Purchase and from the Mexican-American War. In 1812, America and Canada fought in the War of 1812 since the British were still in control of Canada; they wanted to prevent America from expanding. With the question of slavery, the United States split into two sides, the North and South, to fight in the Civil War. In 1865, the war ended, which led to the abolition of slavery. Couple years later, Canada fights for independence from Britain, leading to the creation of the Dominion of Canada. British Columbia, a province of Canada, is added to Canada in 1871 due to the construction of the transcontinental railroad.

20th century was known for the two major world wars. In World War I, Canada fought in 1914 and attacked Germany when they invaded Belgium and France. U.S. joined later in 1917 when Germany sent a letter , known as the Zimmermann Telegram, to Mexico, telling them they would win back their old territory that they lost to America. Eventually, the war ends with the Treaty of Versailles, and women get the right to vote in both countries. In 1920, Canada joins the Commonwealth, which consists of former British colonies who still have a tie to Britain.

World War II came, and Canadians and Americans were involved in defeating Hitler. Japan also attacked American and Canadian property with the Pearl Harbor attacks in Hawaii and air raid in Vancouver. Both Americans and Canadians forced the Japanese residents to move to internment camps.

Today, U.S. and Canada are the most diverse nations, representing many cultures from around the world due to immigration.

In modern day Mexico, corn and chili peppers were cultivated in around 2000 BC. The Olmecs were the earliest civilizations that held a predominant role in influencing religion, such as stone carvings and monuments. The Mayans were the next civilization that preceded after the Olmecs. They were known for their elaborate and detailed calendars and temples. The Aztecs were the next important civilization, which established an extensive empire with roads connecting to various parts of Mexico.

The empire later collapsed because of the Spanish invading in the 1500s. The native population was subjugated for labor because the Spanish wanted to find gold and send it back to the Spanish empire. Also, the natives were converted by the Spanish to Catholicism. As a result, the Spanish and native population would intermarry; this population is known as mestizos. 300 years later, Mexico fights for independence from Spain thanks to a Catholic priest, Miguel Hidalgo y Costilla. In the 1840s, Mexico and America fight in the Mexican-American war, which Mexico ends up giving land to the Americans.

Shortly close to World War I, the Mexican Revolution occurs due to the improper balance of equality in wealth between the rich and poor class. In 1934, the ejido system, which helped stimulate jobs.  Mexico's economy was improving due to production of crops and people contributing to the economy. After World. War II, Mexico is facing problems with rebel groups, such as the Zapatista National Liberation Army, an alt-left group. This led to increase in Mexico's drug trafficking problems and gap between the poor and rich.

In 1500 BC, hunter-gather tribes began to populate the islands. The first known tribe to settle in the Caribbean is known as Ciboney. Later on, the residents in the islands moved to an agricultural based lifestyle with tribes, such as the Arawak and Caribs; they eventually became rivals , and war erupted. The Caribs are the more aggressive and exerted more force.

Europeans, specifically the Spanish, arrive to the Caribbean in the 1490s, when they began to subjugate the native population into slavery. They were forced to work in mining fields or agricultural plantations, such as sugar. Later on, in the 1500s, the Europeans begin to import slaves from Africa for a reliable labor source since the natives were dying of disease. Sugarcane became a cash crop and drove the economy for Europeans. A series of independence movements occurred in several Caribbean islands, especially in Haiti. Haiti was ruled by the French, and their revolution took place in 1791. This influenced other islands to seek for their freedom, such as the Dominican Republic. Freedom also helped slaves to reclaim their liberty and rights through the abolition of slavery. Slavery was fully abolished in the colonies by 1831. There was an apprenticeship program that helped slaves transition to working class members of society.

With the rise of the industrialization movement, Caribbean islands began to improve their transport and communication networks. The Caribbean region was also. heavily involved in World War I by serving alongside the British army. During the 20th century, the islands began to develop their economy through trade and the tourism industry.

Central America's history begins with the indigenous settlement and civilizations. Mentioned in the Mexico section, Mayans and Aztecs were the largest civilizations that brought change and reform to their respective societies.  However, that ended when the Spanish arrived. The Spanish ended up colonizing the entirety of Central America and spreading its religion and customs to the native population. The first Spanish explorer to land in Central America was Vasco Núñez de Balboa, who arrived in Panama. The Spanish crown organized Central America into different regions for control. These territories , known as viceroyalties, consisted of Guatemala, Honduras, El Salvador, Nicaragua, and Costa Rica. In these territories, a Spanish official would be assigned to one of the territories to govern the population and implement an economy and structure society.

300 years later, most of the countries in Central America gained independence from Spain. Shortly after their independence, Guatemala, El Salvador, Honduras, Nicaragua, and Costa Rica formed a union, known as the United Provinces of Central America. 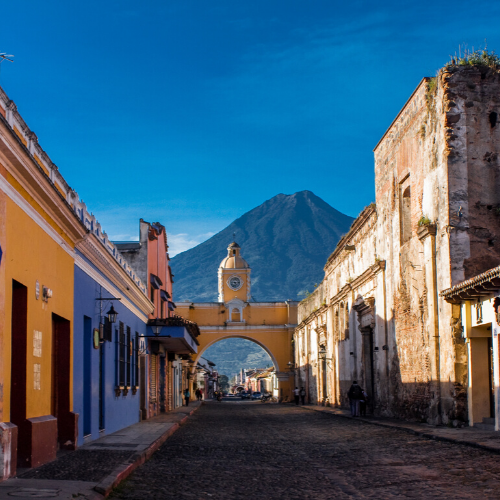