Bangladesh (Capital: Dhaka) is a country located in between Myanmar and India, and surrounded by rivers such as the Ganges and Jamuna. Although these rivers are vital to Bangladesh’s agricultural economy, they contribute to continuous flooding caused by pollution, resulting in many waterborne diseases and other harmful effects. The climate is humid and rainy in the summer, which is helpful for the agriculture in Bangladesh. Bangladesh’s economy is largely dependent on agriculture, with rice, jute, and tea as prime exports. However, garments are now an important export all around the world, especially to Europe and North America. Bangladesh’s main imports are from China and South Asia.

Muslims are a majority in Bangladesh; however, the Hindus also occupy a large minority. The official language of Bangladesh, established after a long war, is Bangla.
Some of the most notable holidays celebrated in the country are Pohela Boishakh, which celebrates the Bangla New Year, and holidays associated with the Bangladesh Liberation War, such as Shodhinota Dibesh (Independence Day), Bijoy Dibesh (Victory Day), and International Mother Language Day.

Currently, Bangladesh and the Bengal region remain prone to natural disasters, with the most current one being the Cyclone Amphan, which caused mass destruction in March 2020. Bangladesh maintains strong global relationships and is involved with many South Asian programs, but internally, it suffers from political corruption from the ongoing battle between the Awami League and Bangladesh National Party for power. However, poverty rates have been declining and education rates have been rising, so Bangladesh is on its way to becoming more developed.

Bangladesh is also hosting thousands of Muslim Rohingya refugees who have been atrociously driven out of Myanmar in the cities of Cox’s Bazaar and Kutupalong. Although Bangladesh itself struggles with a overcrowding and high poverty rates, it continues to support these refugees, and is working with world organizations to get these refugees the necessities and their homes back in Myanmar.

The region of Bengal included the entirety of modern-day Bangladesh and 12 eastern districts of India, including Kolkata. It was first ruled by the Buddhist Mauryan emperor from the 3rd century, and then the Hindu Gupta kings from the 4th to 6th century. From that point, Buddhism and Hinduism coexisted peacefully with the rise and fall of multiple empires, such the Buddhist Pala Dynasty and the Hindu Senas. However, once the Senas took over in the 11th century, the spread and practicing of Buddhism became very limited in Bengal.

As Islam began to spread in Bengal due to Arab traders, Islam began to become the most dominant religion. In the 13th century, Muslims took over the Bengal region from the Senas, and the Mughal Empire ruled from the 1600s to the 1800s. Emperor Akbar, who ruled in the mid- 16th century, was the one who extended Mughal control into Bengal, and this was also when the general area that would later become Bangladesh was fully inhabited.

Although the Mughal Empire did not preach or strongly enforce a religion, solder-saints converted most of the people in the Bengal area to Islam. The Mughal Empire created a system that was mostly impartial to religion in order to create a fair administration, community, and produce hard working-citizens who could reach any position without the worry of religion. This also improved the economy and Bengal’s position in the trading business. The Mughals expanded the area of Bengal and renamed it as Suba Bangalah, also known as the Province of Bengal.

As the Mughal Empire was on its last legs, the Emperor Aurangzeb allowed the British East India Company to come into Bengal and establish a base in Kolkata. At first the Company was a dominant trading organization in Asia, but it quickly became the director of British colonialism. In the Battle of Plassey in 1757 fought near Kolkata, Mughal nawab, or Viceroy Siraj-ud-Dawlah, fought with the British led by Robert Clive. The British came out victorious and the East India Company became the dominant political power in the region.

Governor Charles Cornwallis established the Bengal Presidency with the administrative center in Kolkata, spreading out to modern-day Bangladesh, and parts of India and Pakistan. This rule mainly established the zamindars (landlords) and their property rights and started to create a middle class. In 1857, there was some rebellion against British control in India known as the Great Indian Rebellion because Christian missionaries were trying to convert the Hindus and Muslims in the area. The overall area of Bengal was too big and diverse to control as one region, so the viceroy George Curzon, in 1905, established Western Bengal, including the Indian provinces of Bihar and Orissa, and Eastern Bengal and Assam, because the west was mainly Hindu and the east was mainly Muslim.

However, many Bengalis were against this partition, especially the Indian Congress Party. As a result, most of the provinces were brought together once again, even though many Muslim Bengalis preferred the partition. Most of the zamindars were Hindus, and the Muslims were in the lower classes, which is why they wanted the partition, but after the reunification in 1912, the Muslims became the majority.
After the reunification, the Hindu Indian Congress Party and Muslim League (formed by a nawab to support the original partition), attempted to advocate for the sovereignty of Bengal. This led to many conflicts between the Hindus and Muslims, and although there were brief periods during which they were able to work with each other, as seen in the work between Hindu Krishak Poja party and the Muslim League, these intense conflicts won out. Political leaders of the different groups wanted separate and sovereign states of Bengal.

Throughout this debate, the Muslim League and the Congress Party switched stances many times on whether or not to keep Bengal unified or separated, but it was decided to be separated.
In 1947 , Viceroy Mountbatten became the last British ruler and transferred power to the Bengalis. As a parting act, the British enacted the official Partition of Bengal and divided India in between Hindu India and Muslim Pakistan. Hindu-dominated West Bengal went to India and Muslim East Bengal, including modern-day Bangladesh, went to Pakistan. At this point, what would later become Bangladesh was known as East Bengal.

The partition between East and West Bengal was not a perfect division of Hinduism and Islam, so there was a wide scale migration during which Muslims in West Bengal moved to Muslim-dominated East Bengal and vice versa for the Hindus.

Pakistan first introduced a parliamentary democracy that was based in West Pakistan, where Mohammed Ali Jinnah served as the governor general of East Bengal, with Khwaza Nazimuddin serving as the minister of East Bengal. Jinnah ran a tight government and the Bengalis were already seeing the rise of oppressions against them, such as the little representation they received in the government. In order to unite the two opposite sides of Pakistan, Jinnah declared that Urdu would become the official language in 1948, even though the Bengalis spoke Bangla. This caused much pushback by the Bengalis as the West Pakistanis forced the Bengalis to speak Urdu. When Iskandar Mirza became governor-general a few people after Jinnah, East Bengal was officially renamed East Pakistan.

February 21, 1952 was the date of East Pakistan’s first seed of rebellion, when several students protested against Urdu becoming the national language and were massacred by Pakistani soldiers. This day became a national holiday, and later on, an international holiday. In 1956, Pakistan finally agreed to a government where East and West Pakistan were equally represented. Also during this time, the Awami League party, which championed Bengali rights, was becoming prominent in the Pakistani government.

The Awami League was first able to truly voice its opinions after the 1965 war between Pakistan and India over the Kashmir region, and announced the six-point demand movement and striked to protest for East Pakistan’s freedom from the West. At this point, Sheikh Mujibur Rahman (later known as Sheikh Mujib) was the leader of the party, and under him, the party won the majority of seats in the National Assembly of Pakistan in the first democratic election with equal representation of 1970.

Bangladesh Liberation War and After

War followed soon after this iconic election, when West Pakistani soldiers under Prime Minister Ayub Khan launched Operation Searchlight, where they killed Bengali civilians and students in March of 1971. Also, Sheikh Mujib’s arrest for inciting rebellion among the Bengalis caused rising anger. They had declared themselves officially as the independent state of Bangladesh. This war between the two sides of Pakistan quickly came to an end after India joined East Pakistan’s side since they supported the moderate Awami League party. India’s superior army and the Mukti Bahini forces of Bangladesh defeated the Pakistani forces, and Pakistan surrendered in December 16, 1971. Sheikh Mujib became the first prime minister of Bangladesh in January 1972.

At this point, Pro-Pakistani forces in Bangladesh known as the Razakars were still causing conflict, but Bangladeshi forces retaliated. In fact, these Razakars are still claimed to be found by the Bangladeshi government and are given either lifetime sentences or death sentences, leading to these Pro-Pakistani supporters seeking asylum in Pakistan.

In 1973, Mujib won the election again, but he began to tighten his control and run an autocracy under the guise of president; the economy fell and a great famine started in Bangladesh. As Mujib became more dictator-like and corrupt, the people and army of Bangladesh became increasingly dissatisfied. In August 1975, Mujib and most of his family were assassinated by Bangladeshi Army soldiers who were pro-Pakistani. Zia Ur-Rahman then took power under the Bangladesh National Party, strengthening the government and making advances in education and agriculture to help the entire country. He also started to create a global relationship with other countries, which helped create joint South Asian organizations. However, he too was assassinated in 1981.
​
This battle between the Bangladesh National Party (now led by Zia’s wife, Khaleda), the Awami League (led by Mujib’s daughter, Hasina Wazed), and the army (led by Ershad of the Jatiya Party) is an ongoing one. After Ershad was ousted from power in the 1980s, Hasina and Khaleda have constantly been vying for the position of the Prime Minister. Currently, Hasina serves as the Prime Minister of Bangladesh. 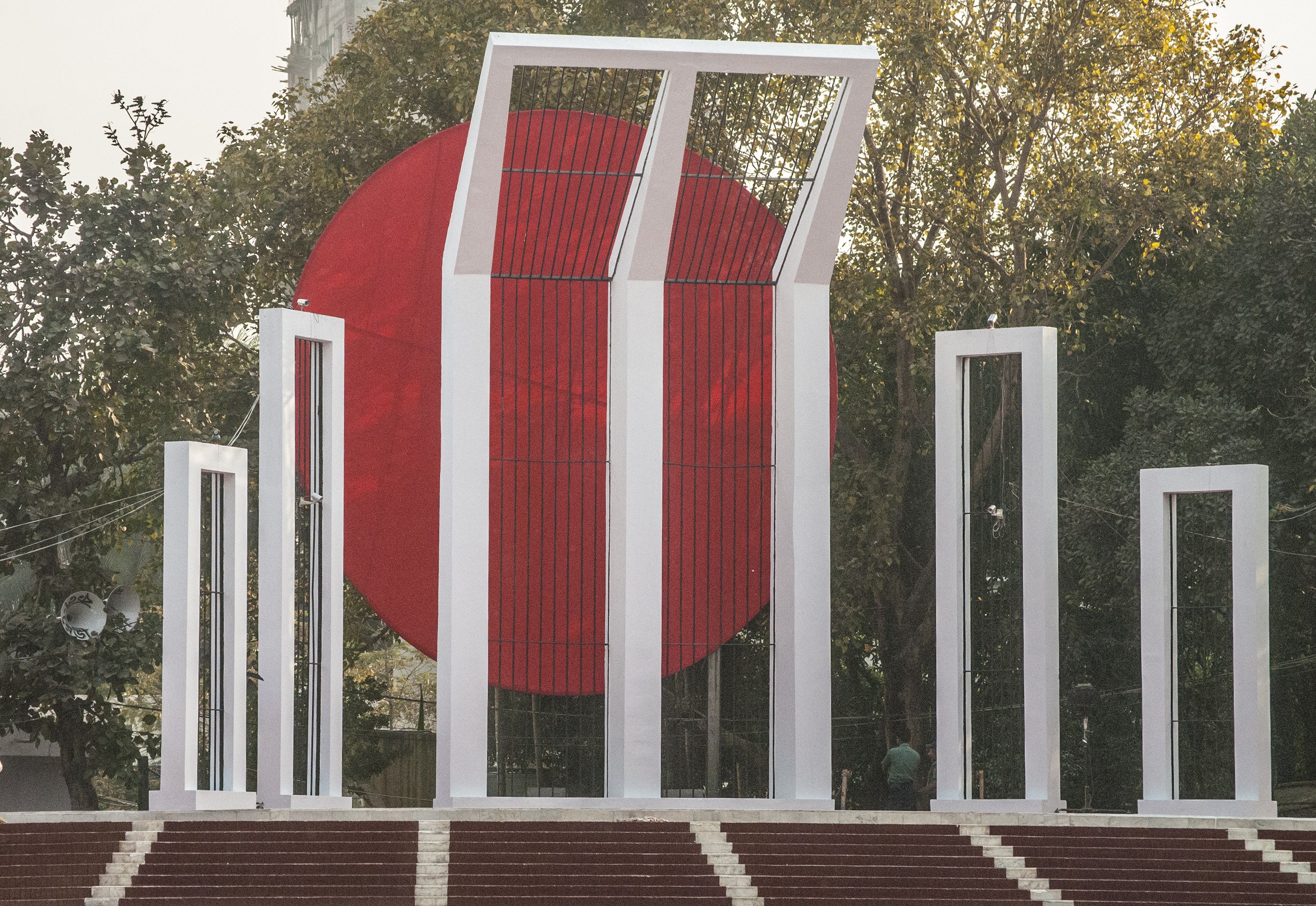 The Shaheed Minar is located in Dhaka and it was built to commemorate the lives of the students who protested for the right to speak Bangla.
Check More Resources Out for Bangladesh History

"Haunted by unification: A Bangladeshi view of partition"