It was initiated in the Neolithic Age (8000 B.C- 5000 B.C), and was present mainly in the regions of the Middle East and the Balkans. The Matriarchal System was a rudimentary type of government, or pseudo-government where the leaders were women.

The term “matriarch” derives from the Greek arché, which translates to both domination and origin. That is because those societies didn't  value only the feminine, but also (and mainly) reciprocation and creation. Their organization centered on the cult of rebirth, not fertility. They believed death was fleeting - the dead would be born again through a woman of the same clan. In that time, fecundation was not linked to sexual relations, so women were credited for bringing back family members. Women being considered leaders of the clans, in fact, was a byproduct of the fact that they enabled rebirth.

Everything during that time centered on this simple word: Great-Mother or Mother-Earth After every winter, vegetation was “reborn”. Thus the allusion of Earth being a mother. Cosmos are when both the Moon and the Sun rose and set everyday, which is seen as a cycle. The effects are associating all natural events to the woman’s
body, this government was based on matrilineally (female lineage - social status and political titles were inherited from the mother) and matrilocality (one’s origin is the home of the first woman of the clan).

Matriarchal societies depended a lot on the natural order of things in terms of establishing power, crops (sustenance), and culture (binding force was the sacralization of natural cycles; respect originated from that).

It’s end is unable to be exactly dated and located, as this was prior to the development of writing. Although short-lived and largely unknown, a good comparison to later patriarchy. Some variations of this are still present in countries like China and India (generally in kins and small, extra official communities). 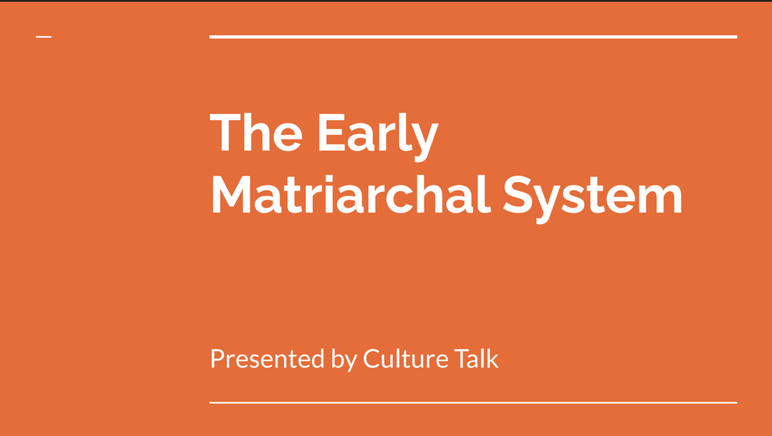