The Ancient and Classical Period covers the foundations and development of government through the Mesopotamian empire to the Roman empire. Nomadic lifestyle was the foundation of many civilizations before agriculture and domestication was introduced. Chieftains and tribes  were the political units that developed during this period of time.

When people began to settle, many people began to form governments to govern society and the people. Monarchy was one of the first forms of government that developed, and Mesopotamia was the first civilization to incorporate it. Sumer, which was one of the  civilizations in Mesopotamia consisted of 12  city states, which each had their own government. Citizens originally held political power, but with ongoing rivalries, each adopted a kingship , resulting in eight kings that ruled. However, under Sargon’s rule, states united, but eventually separated after an invasion of barbarians. Mesopotamia was also known for creating law. The Dynasty of Ur (city state) published earliest Law Code, which simply stated crime and punishment that would be administered by state

Religion also played a key role shaping the government. In ancient Egypt, religion played a key role in shaping government. The Pharaohs were to honor the Gods and were viewed as a God since Pharaohs were viewed as the leaders chosen by God. Another characteristic that developed was centralized government, which is important to unifying people. The Indus River Valley is one of the civilizations that had unification based on city magnitude.

The origin of democracy originated in Greece. Argos, Syracuse, Rhodes, Erythrai, and Athens known for birth of democracy. Some of the provisions that developed in ancient Greece were males over 18 years old (10-20%*) able to participate in politics. They would meet in the City Center to speak and vote on various matters (food supply, military) in Athens. Then , a smaller group, Boule* ( w/ limited term), would decide on topics and their order to be discussed in assembly. The decrees of assembly could be challenged by law courts.

Monarchy was  also present in ancient Greece, but in certain states. Sparta had a two king system, in peacetime they were kept in check by ehpors (elected from assembly). The king held most power in times of war and could be put on trial and exiled.

Tyranny also developed in ancient Greece with leaders going over the law and leaders exercising their power. Peisistratos (Athens 560 BCE) was a “benevolent tyrant who actually paved the way for democracy. Tyranny was also seen in Pheidon in Argos, Syracuse in Sicily, also on Corinth.

Oligarchy, which means rule by a few, was also present in ancient Greece. It often occurred in City-states, and was a result of democracy that went wrong.

The Romans took some of the  democratic principles of government that the Greeks developed. The entire empire consisted of city-states with a king and Senate for the entire empire. It developed checks and balances with each of the different institutions checking on power so that  no one branch of government gets too powerful.

Assemblies were also present in  the Roman empire for laws  to pass with  the consent of the people. These forums served  to represent the Roman citizens and  their views. 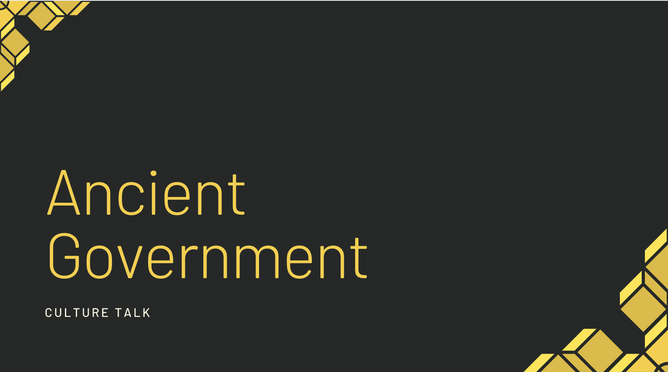