Contemporary Law marks the time period of the 19th century to the present. Law has been a crucial foundation in our world today. Strengthening the importance of democracy and human rights have been the central mission during this time.

In the United States, the concept of judicial review was born due to the famous Supreme Court decision, Marbury v. Madison. This gave more power and authority for the courts to check the power in other branches of government.

The slave trade was also abolished in the early 19th century, which eventually led to the abolition of slavery. The Slave Trade Act of 1807 ended the slave trade in Britain and its colonies. The U.S. and other countries follow suit as well.

In addition to the abolition of slavery, several colonies were receiving independence from European countries, particularly Spain. Several Latin American colonies broke away from their European powers and developed constitutions to signify their independence and  recognition of their statehood. Later on in the 20th century, African and Asian  countries developed their own constitutions once they declared independence.

Also, women’s suffrage began to be implemented in several countries’ constitutions. New Zealand became the first country to allow women to vote in  1893. This allowed women to become more independent.

In addition to advancing women’s rights, worker’s rights were also advanced. In 1911, a fire took place  in a clothing factory and killed off about 150 women. As a result, this led to the passage of several laws, regarding building management and wage regulation, to  protect the safety and well-being of workers. In 1970, the Occupational Safety and Health Administration to further support workers.

This specific time period also marked the beginning of international cooperation. For instance, during the mid-1800s, the U.S. was establishing new relations with other countries, such as Japan and China for trading. The Treaty of Amity and Commerce helped open up ports in Japan after several years of isolationism and contact with other countries. Another example of opening up to international cooperation would be the Sino-Japanese Friendship and Trade Treaty. This was to work out the tariffs between the two countries.

After World  War II, two key outcomes occurred. Because of the horrific events that happened in Nazi  Germany,  the Nuremberg War Crimes Trial took place in 1945 to arrest and prosecute the orchestrators who created the Holocaust and led to killing millions of Jewish people. The other outcome that occurred was the creation of the United Nations, a supranational organization consisting of the majority of countries in the world. After the League of Nations (an initial version of the United Nations) failed, the United Nations began to draft crucial legislation to tie the world together. One key document was the Universal Declaration of Human Rights ,  which outlines all  of the rights that each person has protected, such as the right to marry and vote.

Flash  forward to the 21st century, there  are several agreements and laws that were passed to fight climate change and protect our environment. The Kyoto Protocol is one such agreement to reduce greenhouse gas emissions. The Paris Agreement was passed in 2015 by the UN member states to be more sustainable and solutions to reduce global warming.
Sources 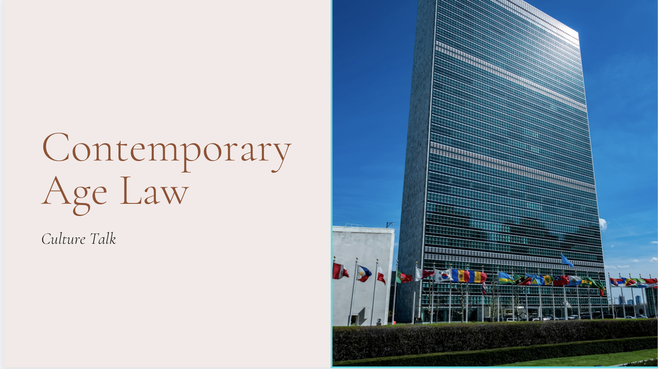