Religious law is based on religious texts and codes that  define the rules  of society. There is an intersection between political and family life when it comes to religious law because the religious  texts  and codes influence how the government should operate. Religious law was heavily implemented in earlier legal systems  in history. However, during the Enlightenment, law began to become less secular since the major tenant focused on the government having separation of church and state.  Today,  religious law is the basis of Muslim predominant societies, such as countries in Middle East and North Africa, and influences the daily lives of people of other faiths.

Islamic law is the well-known religious law in countries today. The sharia and Quran dictate how society and  government should operate. Sharia law originated in the Quran, the religious text  of Islam, and the Sunnah, the teachings and deeds of Mohammed, and it is more explicit over crime punishments, lifestyles for the different genders, and living for all Muslims. In terms of punishments, they are divided into two categories: hadd (set penalties) and tazir (up to the judges to set the punishment). Sharia law also dictates personal and family lifestyle, such as how to pray and provide alms to the poor. In current times, some countries, such as  Saudi Arabia, have been using sharia law to influence family life rather than use it to govern people.

Canon law is another example of religious law, which the Christian teachings influenced canon law. This became a  more prevalent legal system,  which joined religion and government together, especially after Christianity  became a recognized religion in the Roman Empire. Christian teachings influenced how the government should operate, therefore showing more importance towards religious figures and institutions, such as the popes and cardinals. For example, the Roman  Catholic Church followed canon law and served as an  important governmental institution during the Middle Ages. Canon law began to lose relevance when church and state  became separate  throughout the 16th through 18th century, in which Protestantism began to rise.

Today, canon law is used in Roman Catholic communities primarily for religious reasons,  and not applied in the government. Canon law is the rules and  traditions that Catholics follow today, such as criteria for baptism and funerals or steps on how to proceed with religious  services.

In India, the  Laws of Manu served as religious law for  Hindu families. The Law  of Manu covered rules and customs of family and property. When the British came, Anglo-Indian laws helped preserve those traditions mentioned in the Laws of Manu, such as  passing laws of Hindu marriage  and adoption.

Another  religious legal system that  influences the daily lives of individuals is Jewish  law. The Halakha is religious laws derived from the Old Torah. There are 613 mitzvots, which are known as the Laws of Moses and include the Ten Commandments. These  laws are applicable to family and personal life, and are used more by Conservative  Jewish families and rabbis.

Even though religious law is not  used as the country’s main legal system, it still carries  importance in  a person’s religious life. These laws dictate how a person of  a certain faith should abide by the rules of that faith. 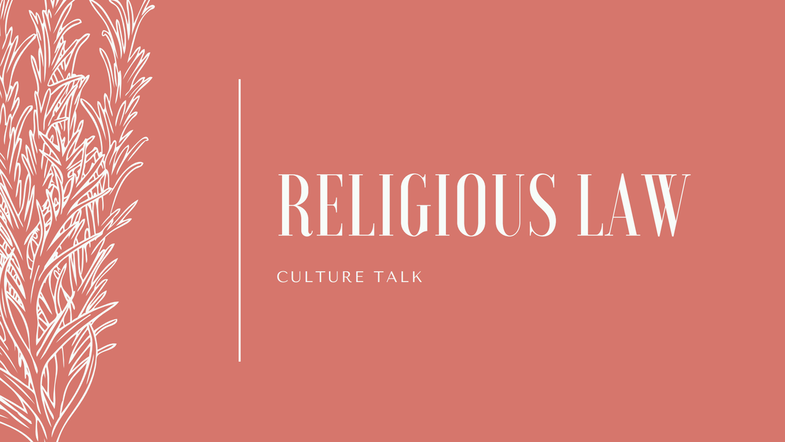